The second round of the 2017 South-African ORE national championship moved to the Kwazulu Natal North Coast in South Africa at a newly build track Gear Raceway in Ballito. This new outdoor asphalt facility has a mixed layout with medium traction. It was the first time at the track for many of the drivers and the layout and ‘out-of-bounce’ grass took many victims during the weekend. It was evident from the start that the local driver and owner Deon Gove was the man to beat as well as Jason Hillcoat, Ashley Hurley and Hein Kotze who went to the pre-national practise weekend.

From the start the battle for TQ was between Jason Hillcoat and Hein Kotze. Jason took Q1 followed closely by Antonio Caroli and Hein Kotze. In Q2 it was Hein Kotze who had a great TQ run but his transponder failed to register his last laps and Jason took Q2 followed by Anderton Smith. Hein Kotze came out flying in Q3 with a great run but with Jason finishing second, the TQ position was all his on a better throw-away. The grid was eventually finalised in Q4 with Hein Kotze 2nd, Antonio Caroli 3rd and Anderton Smith in 4th.

In A1 Jason started well but Hein Kotze caught up to him with a faster run at around lap 10 but a run-off in the grass saw him fall down the grid. Jason won A1 followed by youngsters Willem Janse van Rensburg and Ashley Hurley. In A2 Jason showed his consistency and led from the start. Hein Kotze again caught up to him with a much faster run but unfortunately got a rear body tuck when he made a pass on Jason. He still managed to finish 2nd followed by Nian du Toit in 3rd. Jason’s great consistency and win in A2 also secured him the overall win. Jason decided not to run in A3 which allowed Hein Kotze and Antonio Caroli to show their pace with Hein winning A3 and Antonio achieving 2nd place after coming from last place due to an excursion with the grass. The final podium spots for the event were Hein Kotze 2nd and Antonio Caroli 3rd.

The event did however show that there are some young drivers like Ashley Hurley, Jacques Liebenberg, Pedro de Gouveia, Nian du Toit and Willem Janse van Rensburg who will definitely be in contention for a win in the future races. These youngsters pushed some of the regular A-main drivers into the B Mains and this sets the 2017 season up for some great competitive racing. 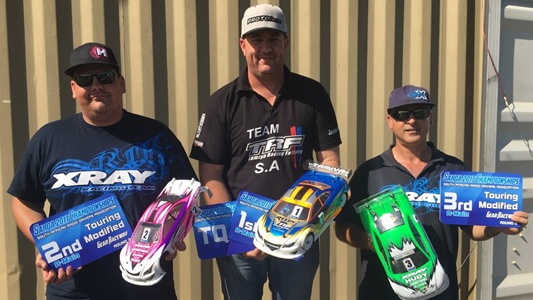 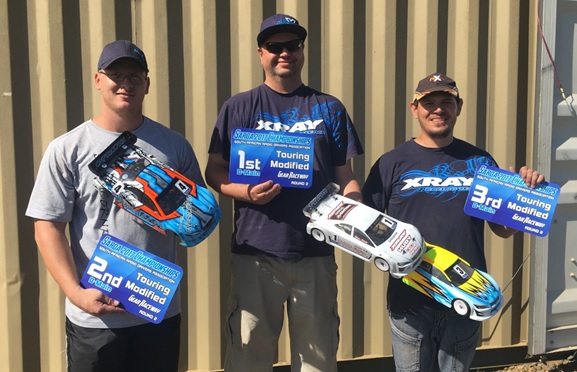 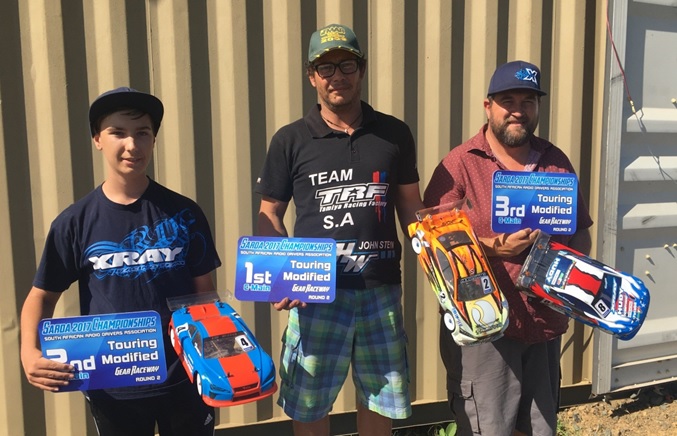 The Pro-stock class was very competitive with a great battle between Jonathan Wilken, Hennie Viljoen, Michael Rabe and Jared Rabe with Jonathan taking the TQ honours with his Xray T4. Jonathan Wilken managed to win both A1 and A2 to settle the win and it was a great battle between Hennie Viljoen, Michael Rabe and Jared Rabe for the final podium positions. It was the youngster Jared Rabe who came from 4th on the grid to take a great second place. 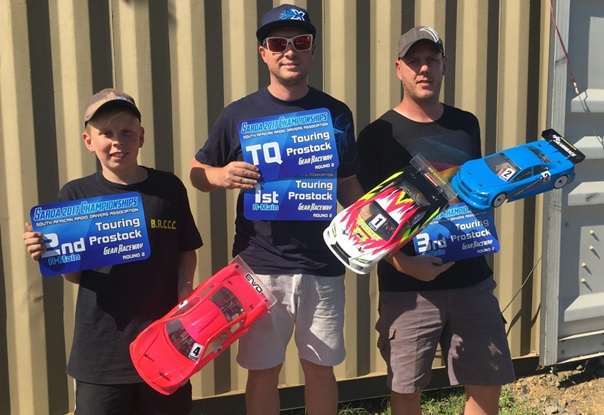 It was the usual fast drivers Jonathan Wilken, Pedro de Gouveia and Tyronne Wilken who showed great pace from the start. It was Pedro who took TQ with his Xray X1, Tyronne starting 2nd and newcomer Nico Kellerman starting from 3rd on the grid after showing some great pace. Pedro de Gouveia drove fast and consistent in winning both A1 and A2 to secure the overall win with Nico Kellerman fighting hard for his second place. The driver of the day was Brett Ross who finished third overall after starting from 10th on the grid. 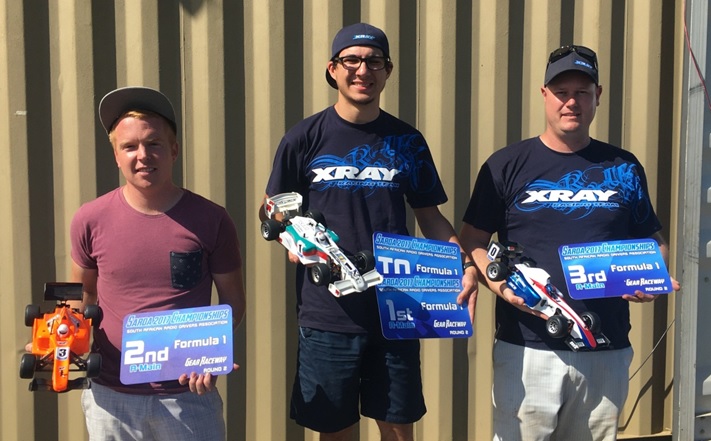 In the FWD class it was Paul van der Westhuizen who dominated the qualifying and eventually managing to TQ followed closely by Bulli Marais and youngster Nico Kellerman. The three of them also finished in the same order in the Sunday mains. 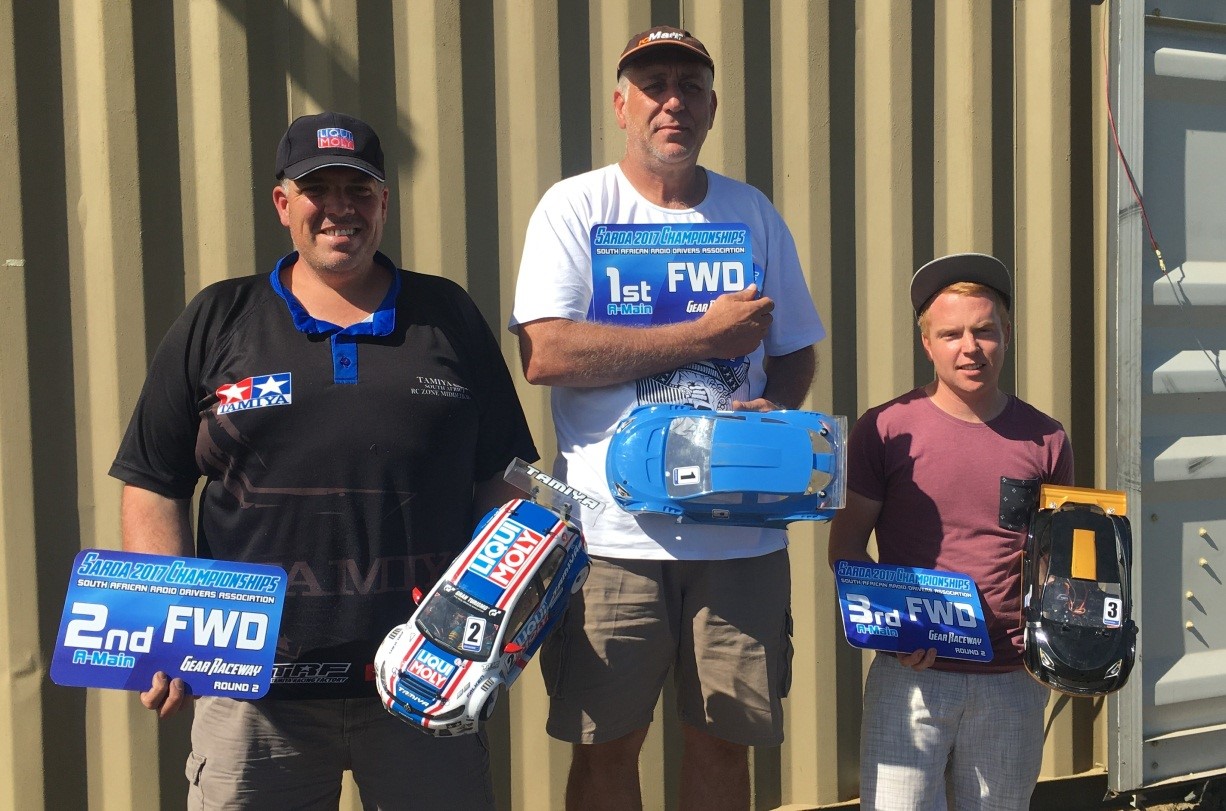