It was time to get the 2017 season rolling with the first leg of the 2017 South African On Road Gas National Championships. The host was TRAP RC venue in sunny Tshwane. The weekend would prove an interesting start to the season with some new rule changes to contend with, which included a new limited tyre rule and a new qualifying format. There were worries about weather as some clouds loomed above, but the weather would play ball and see to another great event.

Practice started on Wednesday and ran through to Friday. TRAP was running a fresh layout for 2017 which saw all classes running the same layout and included the fast left hander into the pit straight but without the tricky chicane (A chicane which has claimed many a part from racers). The layout would still prove challenging with a fast infield and outfield. With over 30 entries across all classes and SA’s fastest all there to compete, we could look forward to great weekend.

Qualifying now sees a new format where drivers are required to start from the pit lane and drive out lap to warm up and cross the line to start the clock. The new system ran well and worries about fuel to make the 5 minute run were unwarranted.

GT8 qualifying would be closely contended with only 1 second between 1st and 2nd spot, followed by 3rd spot only 10 seconds behind. Wayne Breytenbach (Mugen) would claim first by that second over Lieb Liebenberg  (IGT8) who is now running a new chassis. Lieb seemed a lot happier and ready to be more competitive with the new chassis. 3rd spot would go to an RC vet we were all very happy to see competing, Taki Dermatis, multiple SA champ and general RC guru.

200mm Nitro Touring saw 16 entries, but unfortunately would be missing Xray’s Jonathan Wilken, who had to pull out at last minute. The field though was spread nicely across an array of experience and talent. The battle at the top without Wilken would be between current SA Champ Conrad Liebenberg (Capricorn), Willie du Plooy (Xray), Pat Lester (Mugen) and Brent Alexander (Capricorn) where the competition was fierce. Liebenberg and Du Plooy would be the only ones to break the 15 lap mark. Du Plooy has slowly gained a strong foothold as a contender to challenge Liebenberg’s championship this season and he showed that by taking TQ from Liebenberg.  A heat on heat battle would ensue between Lester and Alexander, but it would be Lester to clinch that last podium spot and that number 3 starting block. We also saw great pace from Mike Meyers (Capricorn), Trevor Smit (Mugen), Nico Venter (Serpent) and Jason Landsberg (Serpent).

The usual top 3 battle between Jacques Liebenberg (Capricorn), Wayne Joelson (Mugen) and Antonio Cairoli (Xray) would play out for the qualifiers, not to mention the mains.  Liebenberg would keep his cool though and claim TQ in 3 rounds, with top spot each round. This would not be without major pressure from Joelson and Cairoli who were both in the 17 lap range. 2nd would go Joelson and 3rd to Cairoli. Liebenberg was a class act to keep the focus on his driving and not the pressure.

Drivers in 16 lap territory also displayed some amazing skills and would see a good 5 way battle between Elisio Da Sousa (Mugen), Wayne Sayers (Mugen), Henry Mostert (Mugen), Beyers Hattingh (Xray) and Arnold Vermaak (Team Shepherd). It would be Elisio, Wayne and Henry to round up the top 5 in that order. Elisio and Wayne are really showing their pace and tenacity for Team Mugen.

The GT8 main race went off with a bang. You could definitely see the drivers enjoying themselves. Taki Dermatis in his Mugen GT7 would take an early lead ahead of Lieb Liebenberg (IGT8) and Wayne Breytenbach (Mugen). Taki would ensure some good racing and even after a stop go for corner cutting, he would still take the win. It is great to see the GT8 class growing and the competitors enjoying good racing. 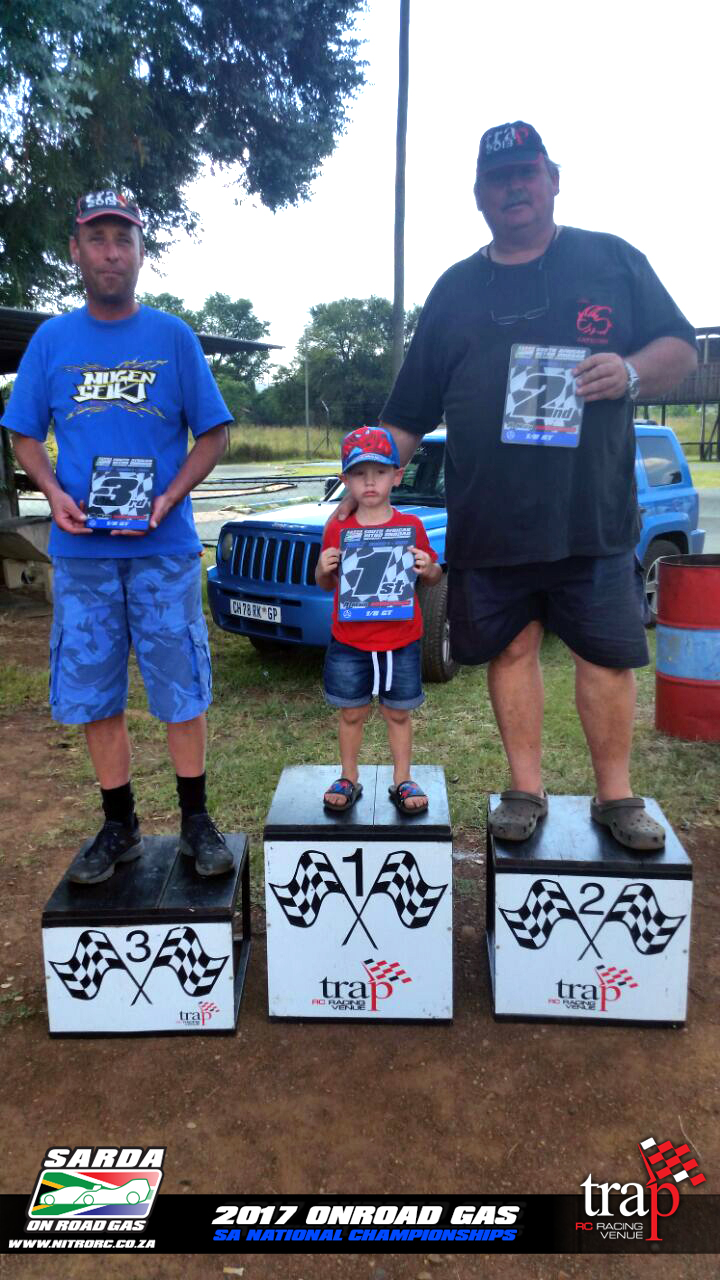 Good racing would ensue for a full B-main grid in 200mm Nitro Touring. Nico Venter (Serpent) who had been quick all weekend had a bit of bad luck in qualifiers, which would have claimed him a spot in the A Mains. Nico, after a bad start, would dominate the race for 67 laps, where technical issues would see him give up first to newcomer from Meyerton RC Club Jason Landsberg (Serpent). Jason definitely showed he has what it takes to be a top runner with a fast pace all weekend.  The rest of the podium would be battled between Errol Warner (Capricorn), Bjorn Boogard (Capricorn) and Matthew Attree (Mugen). Motor issues would plague Bjorn in middle stages of the final, which would see him relinquish the fight for third to Warner and Attree, as Nico Venters woes would continue. Warner would grab second 2 laps ahead of Attree in third. 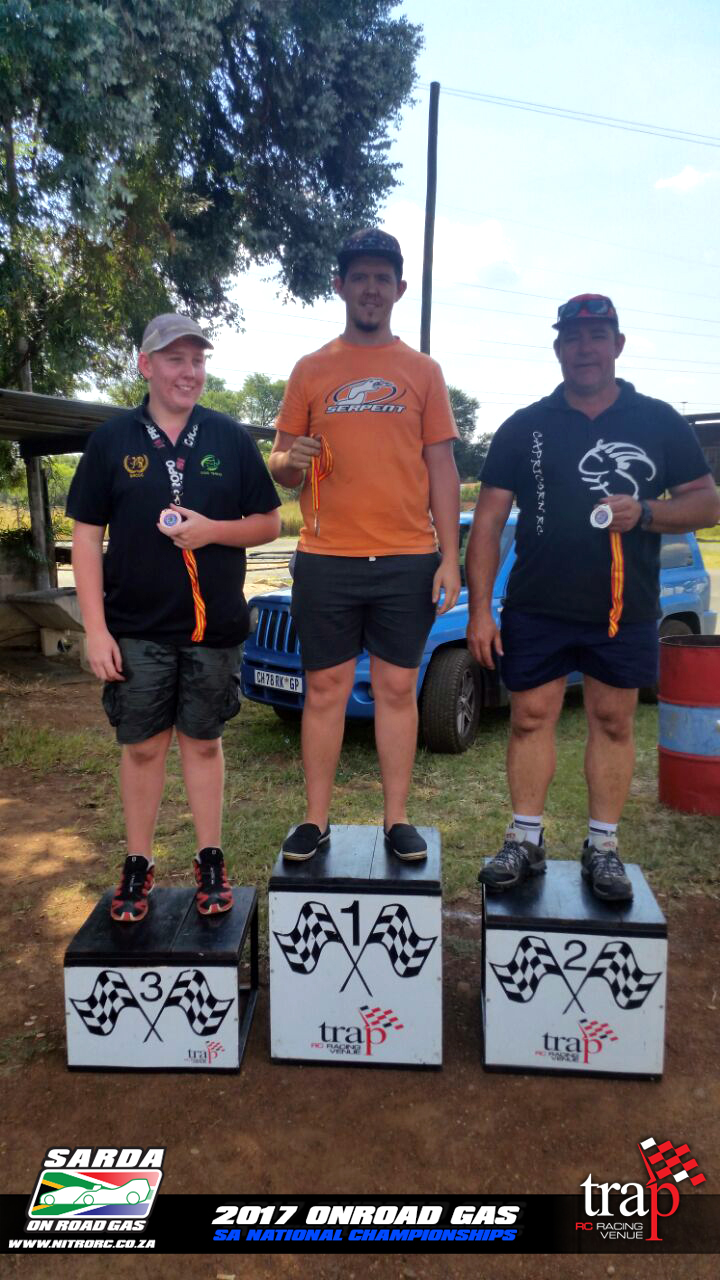 The race would be a battle between TQ Willie Du Plooy (Xray) and current SA Champion Conrad Liebenberg (Capricorn). After a disappointing 2nd qualifying round for Liebenberg, suffering a blown motor, he was ready to claim back his spot at the top. First and second spots would swap 10 times during the race, but fast pit work by the Liebenbergs and consistent lap times would edge Conrad ahead. A slow pit stop for Willie on lap 68 would hand the win to Conrad by 3 laps. Lower down we were looking forward to a good battle between Patrick Lester (Mugen) and Brent Alexander (Capricorn) for third place. A costly mistake by Brent on lap 9 flipping his car and popping a tie rod, would see his podium contention over and clean run for Lester in third from start to finish. 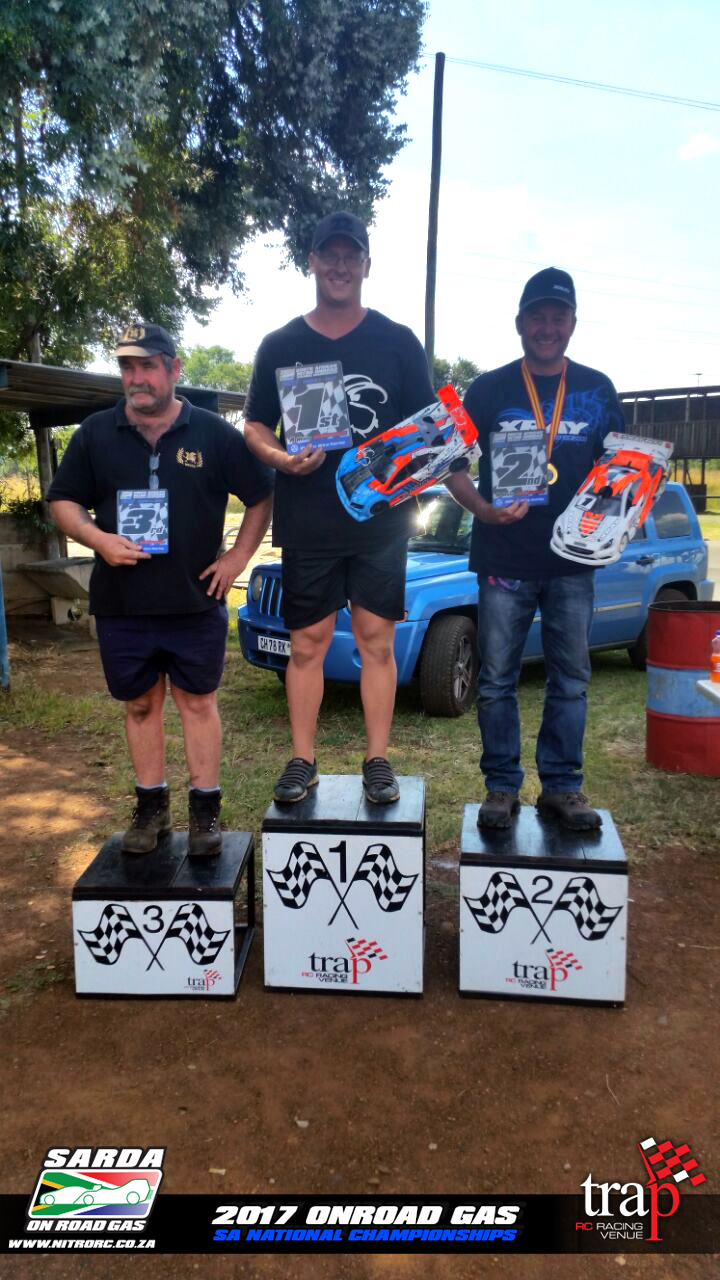 A smaller B-main field than 200mm Nitro Touring, but the pace was good. Arnold Vermaak (Shepherd) would take an early lead, but costly mistake on lap 5 would send his car to the pits for repairs. Errol Warner (Capricorn) would take the lead for the next 50 laps with only a brief battle with Phillip Engall. In the meanwhile Vermaak was back on track in no time and had to play a serious game of catch up. Good driving and good pitwork would see him steal the lead on lap 109 and sail to victory 7 laps ahead of Errol. Phillip Engall kept his cool to round up the podium in third spot.

The 1/8 Scale main event is always a sight to behold with all eyes on the track of competitors and spectators alike.  A clean start saw the top 3 hold formation for 26 laps. It was looking to be a fantastic battle across the top 3 fastest drivers, Jacques Liebenberg (Capricorn), Wayne Joelson (Mugen) and Antonio Cairoli who were in a league of their own, but by lap 26 we could see Joelson looked unsettled and had dropped back to give Liebenberg over half a lap of space. This brought Cairoli into attacking distance of Joelson. Joelson still looking unsettled, let Cairoli by. It looked as if motor issues were causing Joelson’s lack of pace and would see him needing to nurse his car home for the remainder of the race, but still good enough for third. Jacques would maintain that same consistency we have seen from him over the years in his reigning spot of SA champion, his race would be flawless from start to finish. This was not without some heroics from Xray’s Antonio Cairoli, who not only set the three fastest laps of the day with 17.88, 17.88 and 17.89, he would also loose second gear on lap 109 and have to drive the remainder of the race in first gear only. An amazing drive from him would see him maintain second spot. 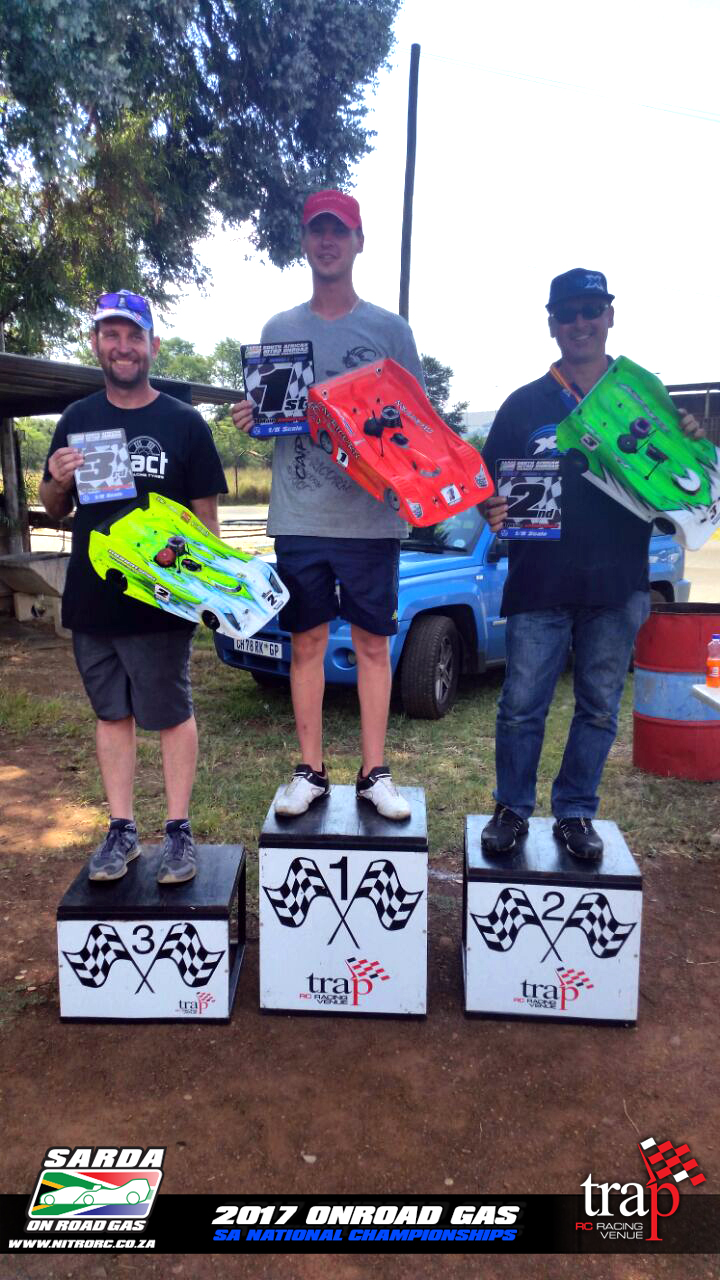